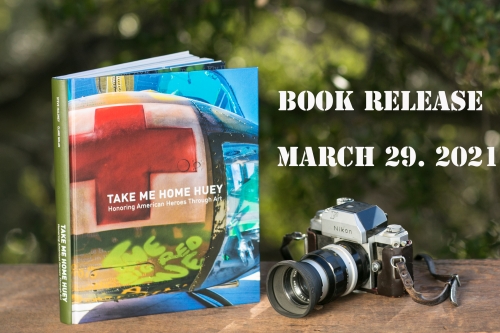 Take Me Home Huey: Honoring American Heroes Through Art is the moving story of visionary artist Steve Maloney's mission to honor Vietnam veterans by resurrecting a shattered medevac helicopter that was shot down on Valentine's Day 1969, and dramatically transforming it into a traveling sculptural memorial to honor those who served.

The book documents, through stunning photographs and Maloney's narrative, how the artwork evolved from a wish to honor Vietnam service members 50 years after the war's end into a touchstone for solace and connection among veterans, including some with PTSD.

Interviews throughout the unique narrative provide vital context for the multi-media work. Readers will hear from the former medevac crewmen, other veterans of the helicopter war, PTSD survivors, art therapists, and historians, as well as journalist Joe Galloway, the official spokesperson of the national Vietnam War 50th Anniversary Commemoration.

The book is the perfect capstone of this groundbreaking multimedia project that includes the sculpture, as well as an Emmy award-winning film and an original song.

“Inspirational, impactful, and thought-provoking. … An emotional treasure of passion.”

“A wonderful happy and sad snapshot of the Huey helicopter, the workhorse of the Vietnam War, and an artist's determination to rebuild an old warbird in memory.”

“Richly documents the Take Me Home Huey project and sheds new light on yet another Vietnam War narrative.”

"An outstanding story of ... a fantastic art piece that overwhelmed me while viewing it, touching it, and feeling its mystical, healing presence."

“A wonderful complement to the Take Me Home Huey: Honoring American Heroes Through Art initiative.”

STEVE MALONEY is a contemporary artist and the creator of the multipart Take Me Home Huey project. Maloney’s art reflects his fascination with velocity, American icons, machine forms, the humor of life and, most significantly, pop culture. Working with “found objects” defines his unique style. He has created his works from crashed NASCAR racing vehicles, items confiscated from air travelers by the TSA and even discarded helicopters. Maloney’s original works have been exhibited at museums and galleries throughout the United States and featured in articles in USA Today, The Wall Street Journal and Time magazine, and on CNN Headline News and PBS.

CLARE NOLAN is an award-winning writer and documentary filmmaker whose work has been broadcast globally on the National Geographic and Discovery channels. Over her 20-year career, Clare has tackled a wide range of topics, from archaeology and aviation to the wonders of the natural world. In the Discovery Channel film, Hugging the Deck, Clare told the unknown story of the bloodiest naval air squadron in the Vietnam War. Her National Geographic documentary, Secrets of the Moon Landings, related the high-stakes drama of the Apollo missions.

DANIELL CORNELL is an independent arts professional, cultural historian, and curator. He has held positions at the New Museum, the Morgan Library, the Yale University Art Gallery, and the Fine Arts Museums of San Francisco. Most recently he was director of art at the Palm Springs Art Museum.

A portion of the proceeds from the book sales will be donated to benefit art therapy programs for veterans.